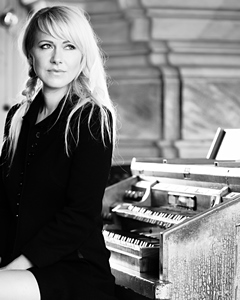 In Katta’s music, ancient and modern worlds come together, the sacred meets the profane, and technological chasms are crossed: you might hear her play on some of the world’s most treasured pipe organs in churches and cathedrals, or on her state-of-the-art, custom-built electric touring organ – and whether the ambience is provided by the dreamy acoustics of vaulted sacred spaces, or electronic soundscapes weaving in and out of her organ lines, the spirit of her music is unmistakeable: ethereal, experimental, arresting.

Katta first came to international prominence as a classical organist and harpsichordist, performing with orchestras such as Anima Eterna (with Jos van Immerseel), Zurich Chamber Orchestra (with Sir Roger Norrington), the Royal Flemish Philharmonic, and the Prague Symphony Orchestra – but it was when she started writing and performing her own music that her artistic identity truly asserted itself. 2016’s ‘Veni Sancte Spiritus’ album was the first to showcase her compositions – other-worldly, spiritual works featuring distinctive vocals and tinkling, percussive bells: by turns lyrical and jarring, they seemed to come from a distant and mysterious past, and yet to belong entirely to the present.

Katta performs these works in solo recitals and in arrangements for organ and orchestra. In addition, she collaborates with artists from the worlds of electronica and rock, writing and performing experimental and song-based material.

Katta’s music – unconfined by genre, yet always instantly recognisable as her own – is living proof that the organ remains a vital instrument in the 21st century.