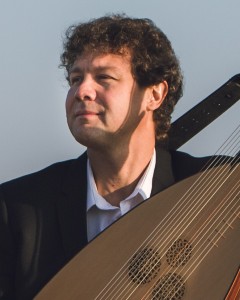 Theorbist Marek Kubát gained his first musical experience at the age of ten, when he began to become acquainted with playing the guitar as a self-taught person. Later, he studied this instrument at the Elementary Art School in Tišnov with teacher Miroslav Ševčík and privately with Stanislav Juřica, a professor at the Pardubice Conservatory. He gained knowledge in the field of jazz guitar and harmony through lessons with jazzman Vilém Spilka. He studied lute at the Academy of Early Music in Brno under the pedagogical guidance of Miloslav Student. He completed lute master classes (Paul Beier, Michael Fields). From the age of fifteen he moved on the concert stage with bands of various orientations (eg folk-oriented Malevil, jazz-rock Ha-Band, jazz Mañana, Czaldy-Waldy quartet playing world music, etc.).

He teaches at the Elementary Art School in Tišnov. He collaborates with the Studio of Musical Acting at the Theater Faculty of the Janáček Academy of Performing Arts in Brno. He is the bandleader and arranger of the jazz band Undistortion.