Ranks among leading Czech pianist of the present time. She is a sought-after chamber accompanist of soloists in the Czech Republic and  internationally, including J. Špaček, R. Patočka, J. Bárta, S. Šaturová, C. Chapelle, E. Tzikindelean, and others. She is a member of the Eben Trio with which she won the International Chamber Music Competition in Lausanne.

She was the only Czech pianist to attend the prestigious Verbier Festival Academy 2013 in Switzerland run by M. Pressler and G. Takacz-Nagy. Her successful debut at the 2014 International Chamber Music Festival in Newport was acclaimed by critics as a “stunning performance /auguring/ a very bright future.”  Terezie is one of the Yamaha Artists for the Czech Republic and part of the stable core of the IMF Kutna Hora.

Last year Terezie Fialová and Jiří Bárta created a sharply focused and breath-taking  rendition, in the form of  a complete studio recording, of Beethoven’s sonatas for piano and cello. 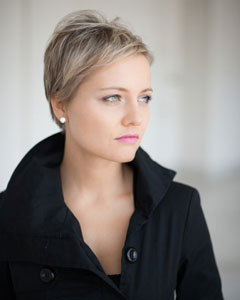