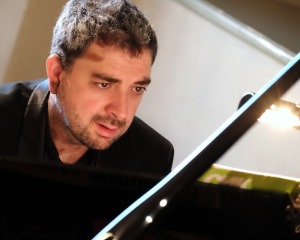 was born in Kharkov, Ukraine. At the age of 5, he was enrolled in the Gnessin State Musical College in Moscow as a student of Tatiana Zelikman. He continued his studies in Russia, England and Italy. Since his sensational debut recital in the October Hall of the House of Unions in Moscow at the age of 13, he performs solo recitals at major festivals and the most important concert venues worldwide and appears with leading international orchestras including the New York Philharmonic, Chicago Symphony Orchestra, London Symphony Orchestra, St Petersburg Philharmonic Orchestra, and many others. As a passionate chamber musician he has collaborated with such artists as Gidon Kremer, Misha Maisky, Mstislav Rostropovich, Natalia Gutman, Dmitry Sitkovetsky, Daishin Kashimoto, etc. In 1996 he was nominated for a Grammy award for Bach’s Goldberg Variations. Recently, leading from the piano, he released all of Bach’s seven keyboard concertos with the Stuttgart Chamber Orchestra. He is a Fellow of the Royal Academy of Music in London and has been appointed a professor of the Lucerne University of Applied Sciences and Arts since 2008.